A Gentleman’s Guide to Love & Murder – Reviews and More

Four out of four stars

“Fabulous…Superb…Here’s your guide: Get your tickets while you can.”

“Matthew Crowle puts his lanky frame and rubber face to satisfying use here as the various members of the D’Ysquith family, bringing his own fresh and funny spin to the role(s) created by Tony nominee Jefferson Mays.”

“…this genially dark comedy, the winner of the 2014 Tony Award for best musical, is also joyfully witty, expertly goofy and among the most literate new shows to hit the Great White Way in recent years.”

“Andrés Enriquez, an actor I’ve seen in various ensemble roles around the city in recent years, shows up here with what ought to be a breakout leading performance as Monty: assured, urbane, engaging and remarkably well-sung.”

“A smartly funny lark, produced by a Porchlight at the top of its game?”

Three out of four stars

“If they gave out awards for acting with your eyeballs, Matt Crowle would have no competition whatsoever. He can throw ’em back into his head, cross ’em nine ways to Sunday and, in a particularly enterprising bit of comic business, make ’em dance in time to the music of Robert L. Freedman.”

Three and a half stars

“It’s not easy to balance the worlds of love and murder, but the audience of Gentleman’s Guide to Love and Murder is treated to a great time watching the cast accomplish just that! It works because the incomparable Matt Crowle dons character changes with comedic ease and our “murderer and man in love” Andres Enriquez is so angelic that we can’t help but cheer for him! The rest of the cast keeps the show’s pace and energy at its best. It’s another Porchlight success story, but then again anything Porchlight brings to the stage, is a guaranteed great time!”

“Not even the force of a polar vortex could deter the performers and audience as Porchlight Music Theatre opened its altogether bravura production of “A Gentleman’s Guide to Love & Murder” this week. And maybe that’s simply because this brilliantly conceived and equally brilliantly performed show was meant to defy the odds on every count.”

“Not surprisingly, this musical, with its sparkling, satirical, immensely clever lyrics by Robert L. Freedman and Steven Lutvak, and its zesty, neo-operetta-style music by Lutvak, has rarely been revived since it received the Tony Award for Best Musical in 2014. And as you watch the wildly gifted, Broadway-level Porchlight cast – ingeniously directed and choreographed by Stephen Schellhardt, in collaboration with Aubrey Adams – you can quickly understand why. Not only does it require an ensemble of the most exceptional actor-singers who possess a flair for high-styled, mock-British comedy. But it also demands the gifts of a comedian of singular physical and verbal genius.”

“And in Matt Crowle – who by every measure should be a Broadway star – this production has its man. In fact, it has seven men and two women, (nearly) all of whom meet untimely deaths, and all are portrayed to laughter-inducing, phenomenally dexterous effect by this one seemingly exhaustion-proof actor.”

““A Gentleman’s Guide” arrives on the heels of Porchlight’s unforgettable production of “Gypsy,” and only confirms that the company is on a powerful roll at the moment. Next up? “A Chorus Line.” So just start counting “a five, six, seven, eight.”

Five out of five stars

“Porchlight Music Theatre has done it again!” “Put this one on your MUST SEE list!”

“Matt Crowle, who is quite the song and dance man truly steals the show with his charm and wit and the ability to leave the stage as one characters and return as another in the blink of an eye.”

“ This is a true ensemble piece where timing is of the greatest importance and Schellhardt and his cast are a delight to watch.”

“A Masterclass in Comedy”

“… the superlative [Matt] Crowle, a skilled actor, comedian, dancer and singer and one of Chicago’s top talents in each of those categories, who conducts a masterclass in comedy in a performance that everyone will be talking about for a long time.”

“Sharriese Hamilton’s Lady Eugenia stands toe-to-toe with Crowle’s Lord D’Ysquith at the dinner party in a comic confrontation that is one of the most hilarious sequences you will ever see.”

GO TO THIS SHOW!

“Take the revenge fantasy of Sweeney Todd and blend it with the silliness and absurd comedy of The Mystery of Edward Drood and you might have something like A Gentleman’s Guide to Love and Murder, the wonderfully engaging and entertaining musical now playing at Porchlight Music Theatre.”

“From the opening (in which the ensemble urges anyone in the audience who is “of weaker constitution” to leave before things get tense), Schellhardt’s playful movements, all grounded in the upper-class British atmosphere of this show’s Edwardian setting, are hilariously devised.”

“…it is Crowle who steals the show here. Adorned with fake mustaches and wigs and other disguises, he gives a tour de force performance as the doomed D’Ysquith family…”

“It’s a tour de force times ten as Monty Navarro, distant heir to the D’Ysquith fortune, slaughters his way to an earldom and marriage, for better or worse, with a doting cousin. A romp where vengeance gets served up hot and cold, A Gentleman’s Guide to Love & Murder is convulsing the Ruth Page Theater in this unstoppably hilarious revival. On opening night Stephen Schellhardt’s hilariously stylized staging defied subzero temperatures to warm a very receptive audience for Porchlight Music Theatre’s latest triumph.”

“Masquerading as a playful Edwardian pantomime, this delicious 2013 musical turns systematic slaughter into an art form.”

“By evening’s end the unspeakable has become the unbeatable, a circus of treachery worthy of any House of Peers.”

Three and a half stars out of four

“Directed and choreographed by Stephen Schellhardt, the production moves seamlessly from one hilarious “accidental” mishap after another as Monty seemingly innocently engages in activities with each relative ahead of him.”

“With music by Stephen Lutvak, lyrics and book by Robert L. Freedman, and music directed by Andra Velis Simon, the entire cast’s singing, dancing, and acting with phenomenal accents makes the audience feel like they’re in England.”

“A hysterical script and top-notch ensemble make A Gentleman’s Guide to Love and Murder, in this writer’s opinion, a night of non-stop fun.”

“Gentleman’s Guide’s script is farcical in nature, full of over-the-top comedy and a darkly humorous score that kept the opening night audience laughing from start to finish.”

“Some of Chicago’s Best on Stage…There’s no Excuse to Miss This One.”

“… a thoroughly wonderful musical comedy about an average Joe in line for an earldom and the lengths he’ll go to get to the top of the list.”

“While [Andres] Enriquez winningly embodies Monty’s charm and ingenuity, it’s Jeff Award winner Matt Crowle who steals the show as every member of the D’Ysquith family that must meet their maker in order for Monty to get his due. Crowle wows again here, after earning the city’s top acting honors as Charley Kringas in Porchlight’s production of Sondheim’s Merrily We Roll Along last season.”

“one of the most reliably entertaining companies in Chicago’s theatrical landscape.”

“As the mercury gets back above freezing over the next few weeks (really, it can only go up from here), there’s no excuse to miss this one.”

There is much to enjoy in director-choreographer Stephen Schellhardt’s production.

The projection designs by Anthony Churchill are such fun that we don’t care that we can’t have castles in the intimate Ruth Page Center auditorium.

Caron Buinis (Miss Shingle) is gruff, scary and utterly endearing as the family friend who knows where the evidential birth certificate is hidden.

Carrying both the weight of the D’Ysquith family and Mays’ original performance on his slight shoulders, Matt Crowle does yeoman work, and is particularly successful with his less shouty characterizations.

The busy ensemble was excellent throughout.

Sharriese Hamilton stopped the show while angrily eating nonexistent food in a sexual frenzy; moments such as these cannot be had for a price.

“This is Murder Most Fun”

“Every member of the D’Ysquith family is played by the same actor, Matt Crowle. It’s less a showy role than a whole show unto itself, and Crowle plays it to the hilt, conjuring laughs from thin air on top of the many punchlines gifted him in the script. But the production’s secret weapon is Enriquez’s megawatt smile: a grin that morphs from wide-eyed to maniacal as Monty spills buckets of blood but never loses an ounce of audience sympathy. Forget murder most foul—this is murder most fun.”

“It’s better than the downtown shows.”

“A GENTLEMAN’S GUIDE is a magnificent musical whirlwind, pulling the best elements of farce without being too overbearing. Set designer Angie Miller has designed a simple, period-perfect space that allows the actors to navigate between a number of locations. Jeff Hendry’s costume designs deck out the ensemble in over-the-top Edwardian garb that suits the musical’s outsized nature.”

“A GENTLEMAN’S GUIDE owes much of its humor and entertaining strength, though, to the gentleman who plays all the D’Ysquiths. Crowle wins the day here. He’s positively elastic, both in terms of facial and body expressions, and he easily slides from one character to another; sometimes within a matter of seconds. Crowle is an expert at physical humor, and A GENTLEMAN’S GUIDE quite literally allows him to wear many hats. He sings and dances his way through his portrayals of all the family members, and he’s dynamite at every turn.” 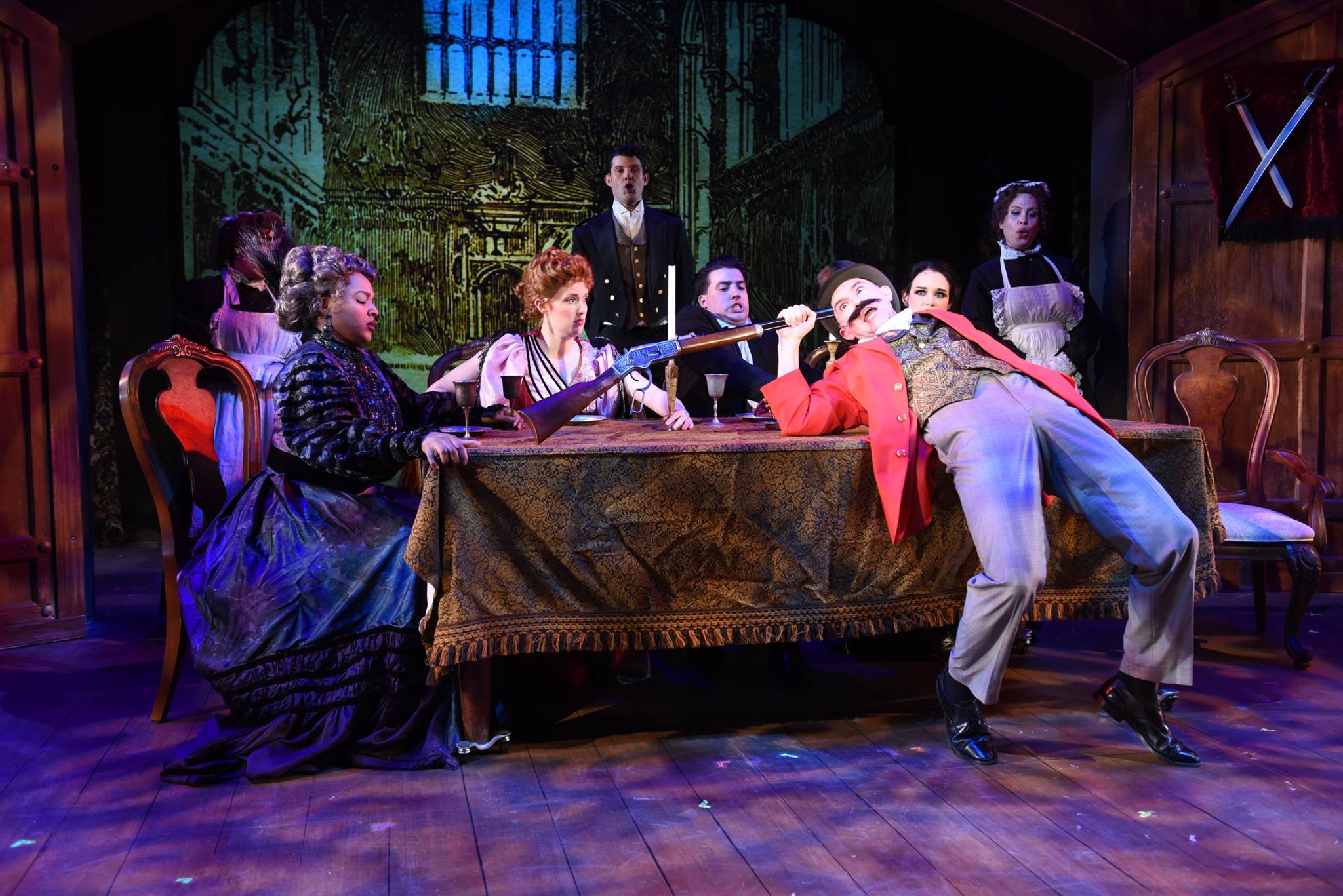 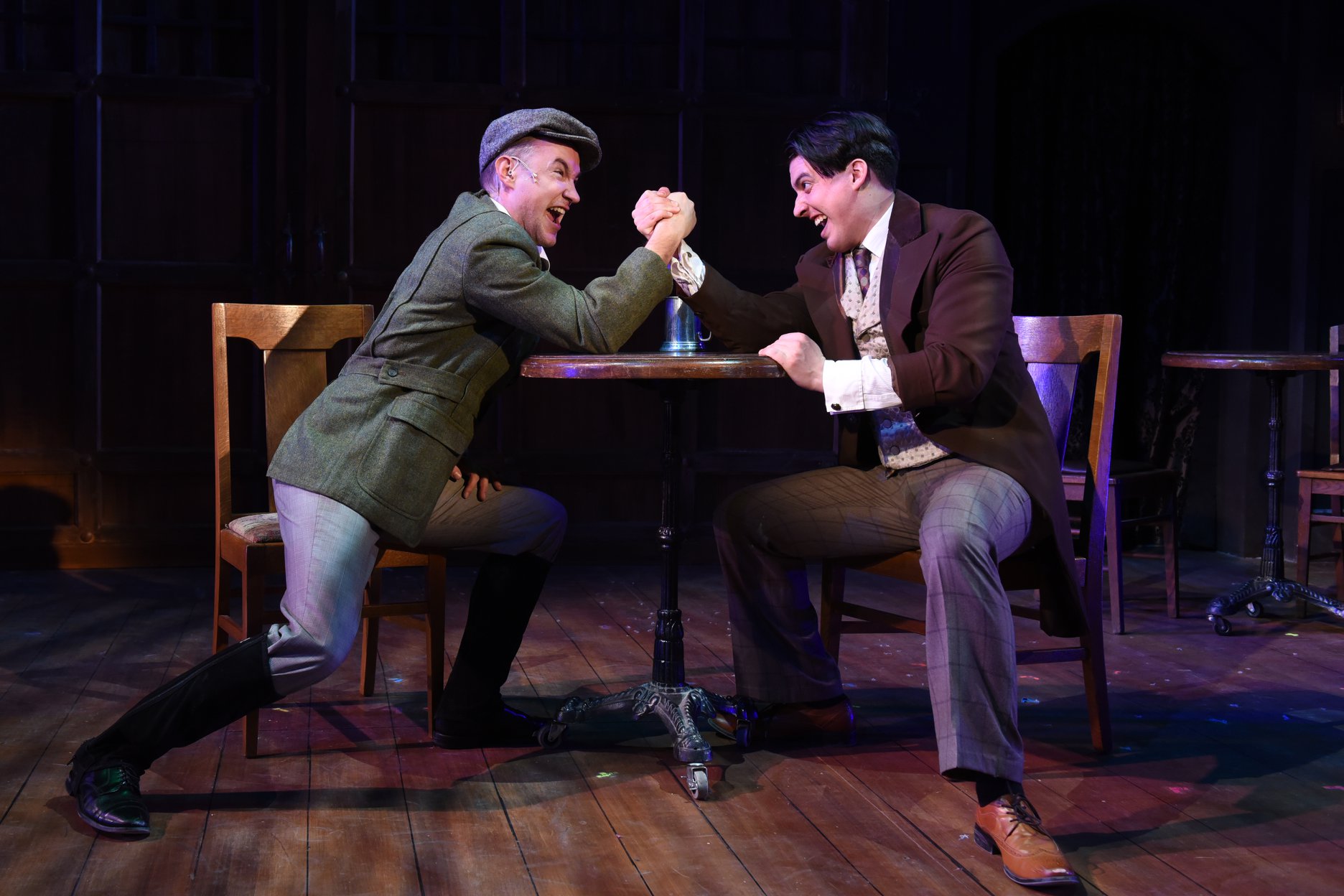 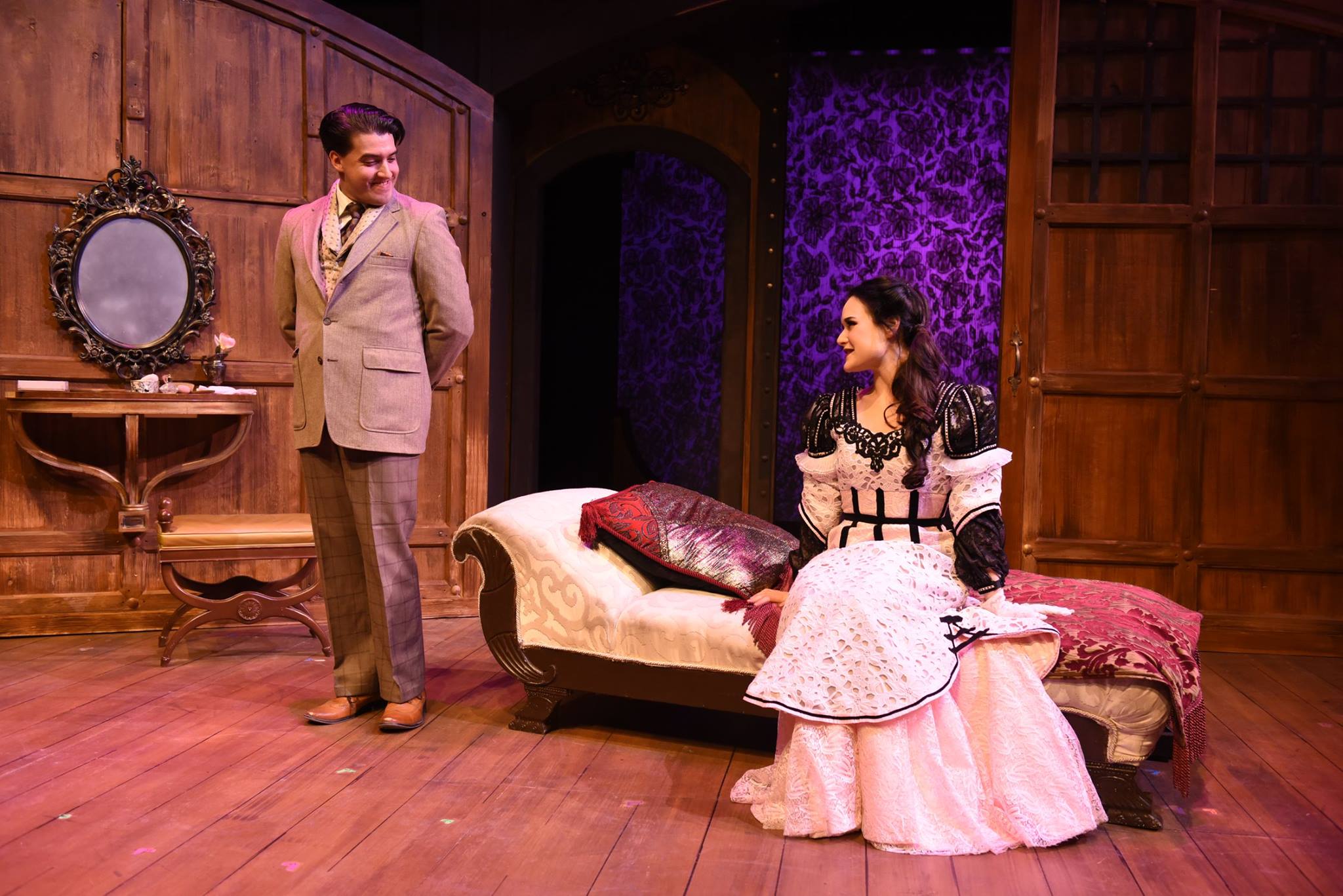 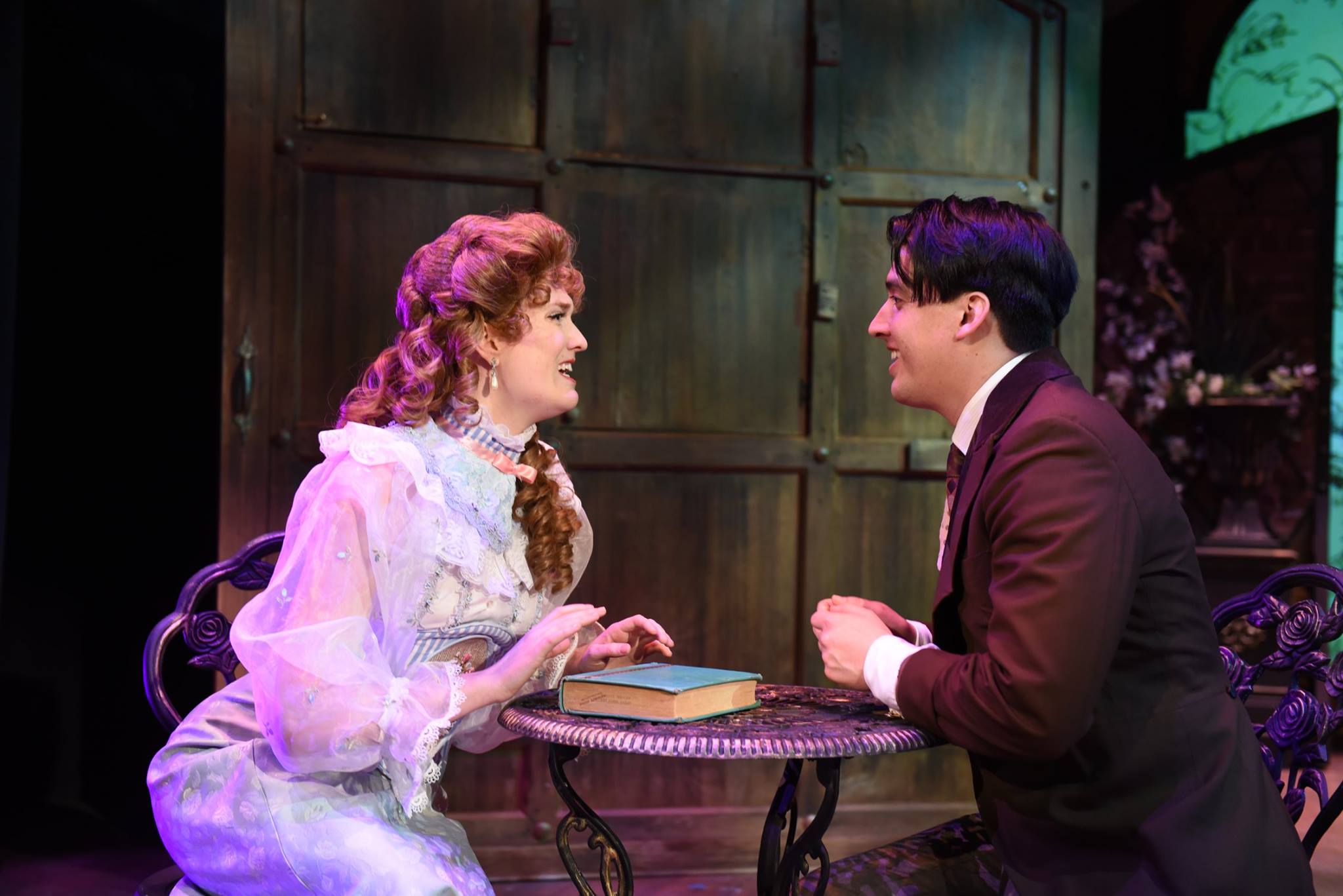 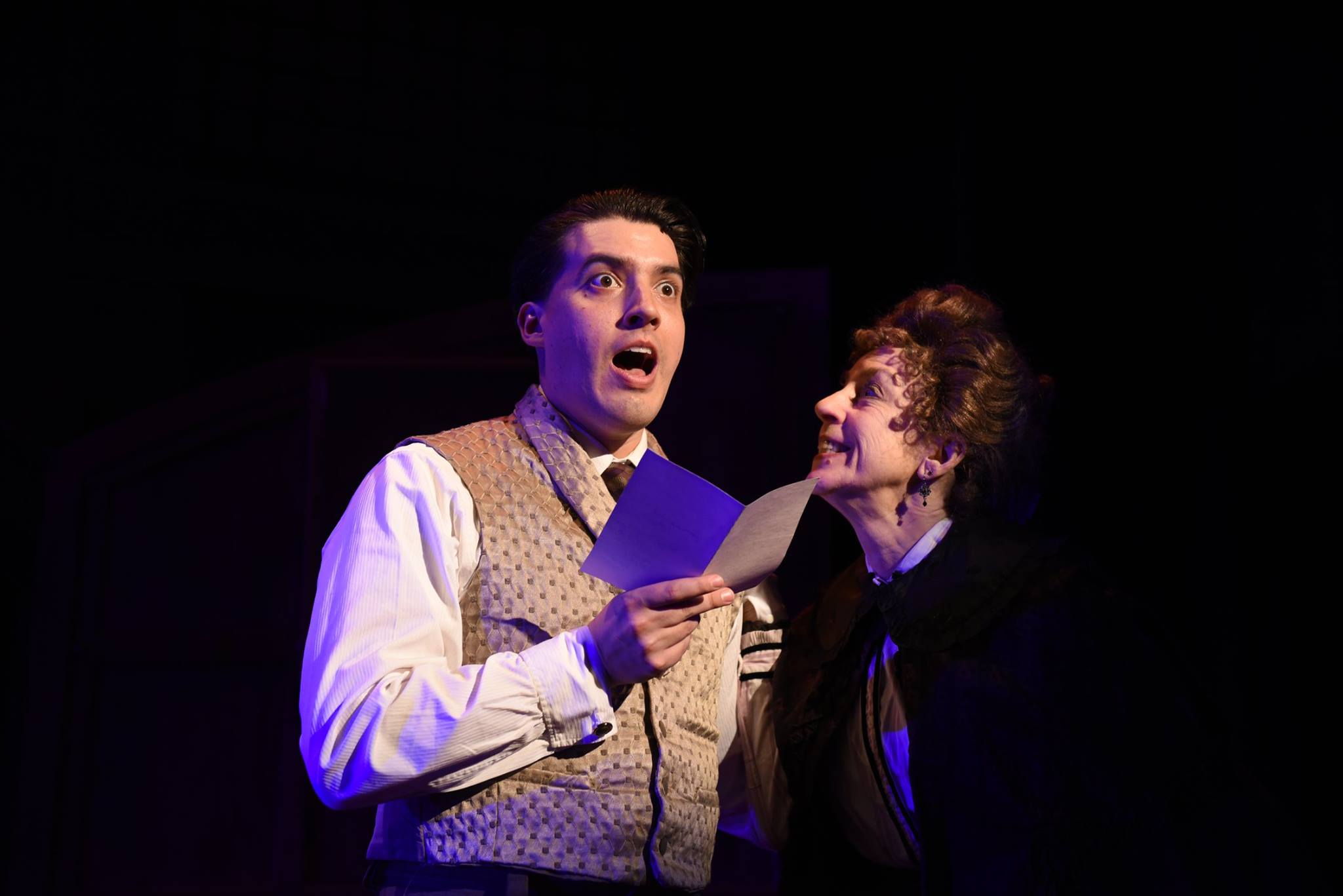 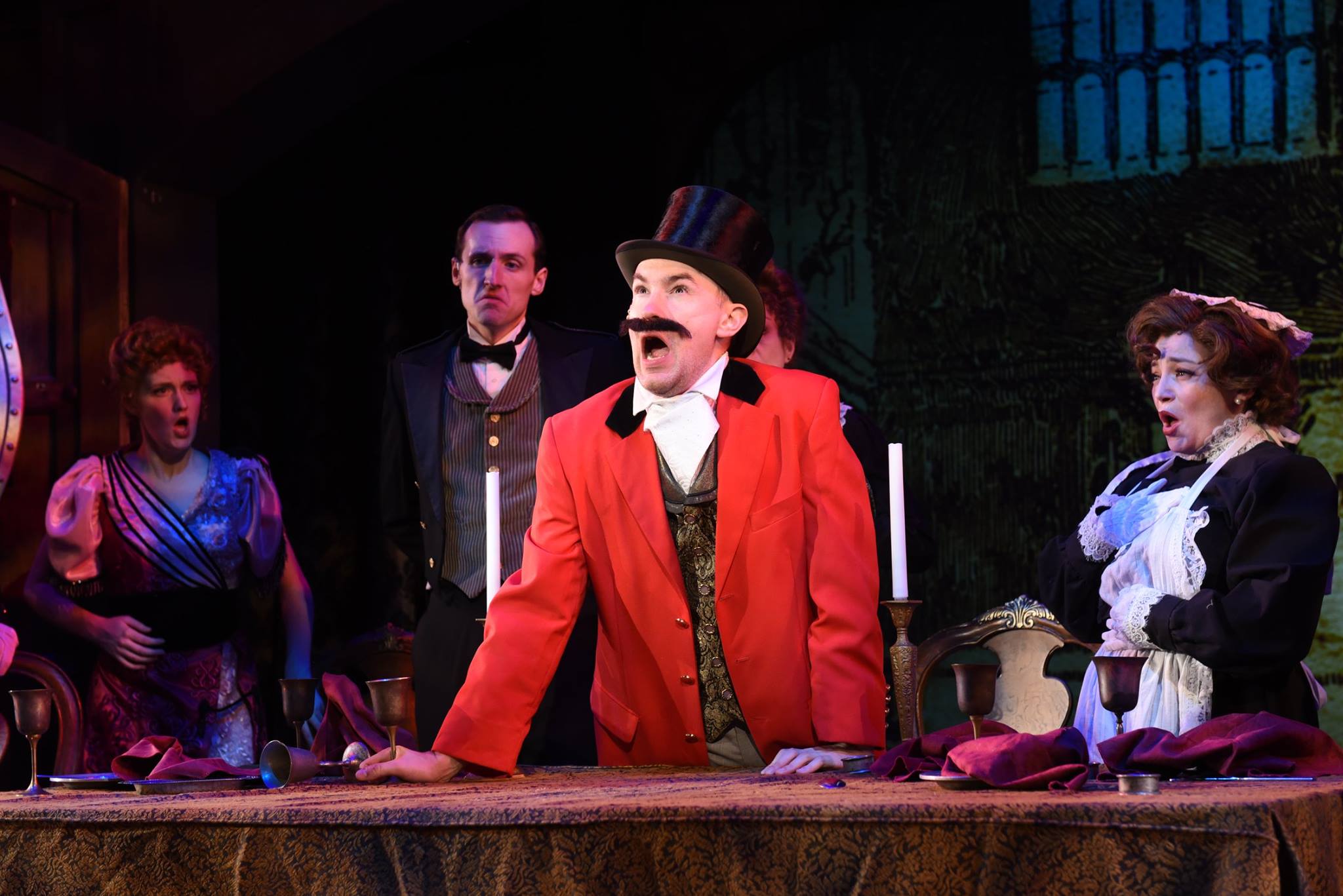 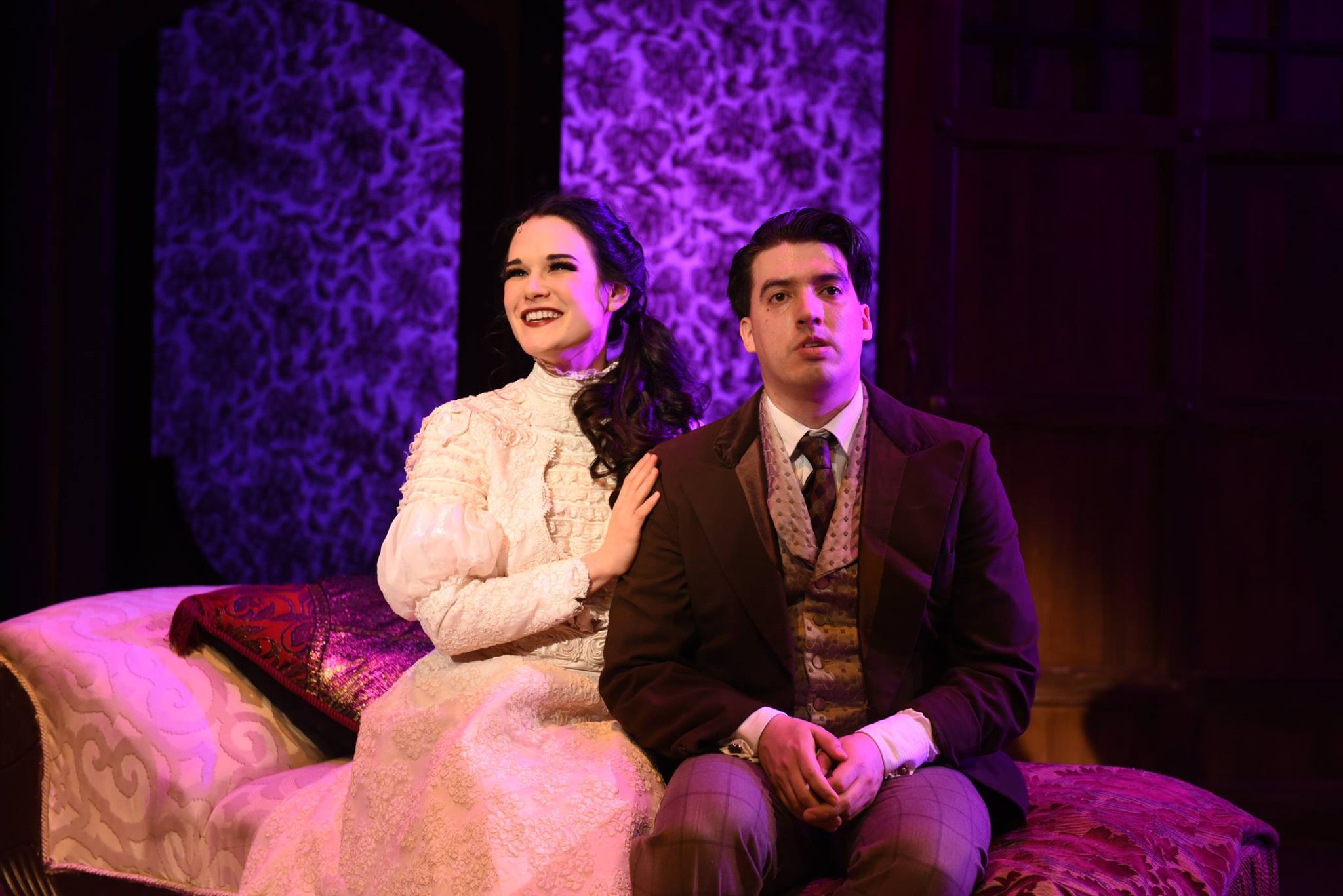 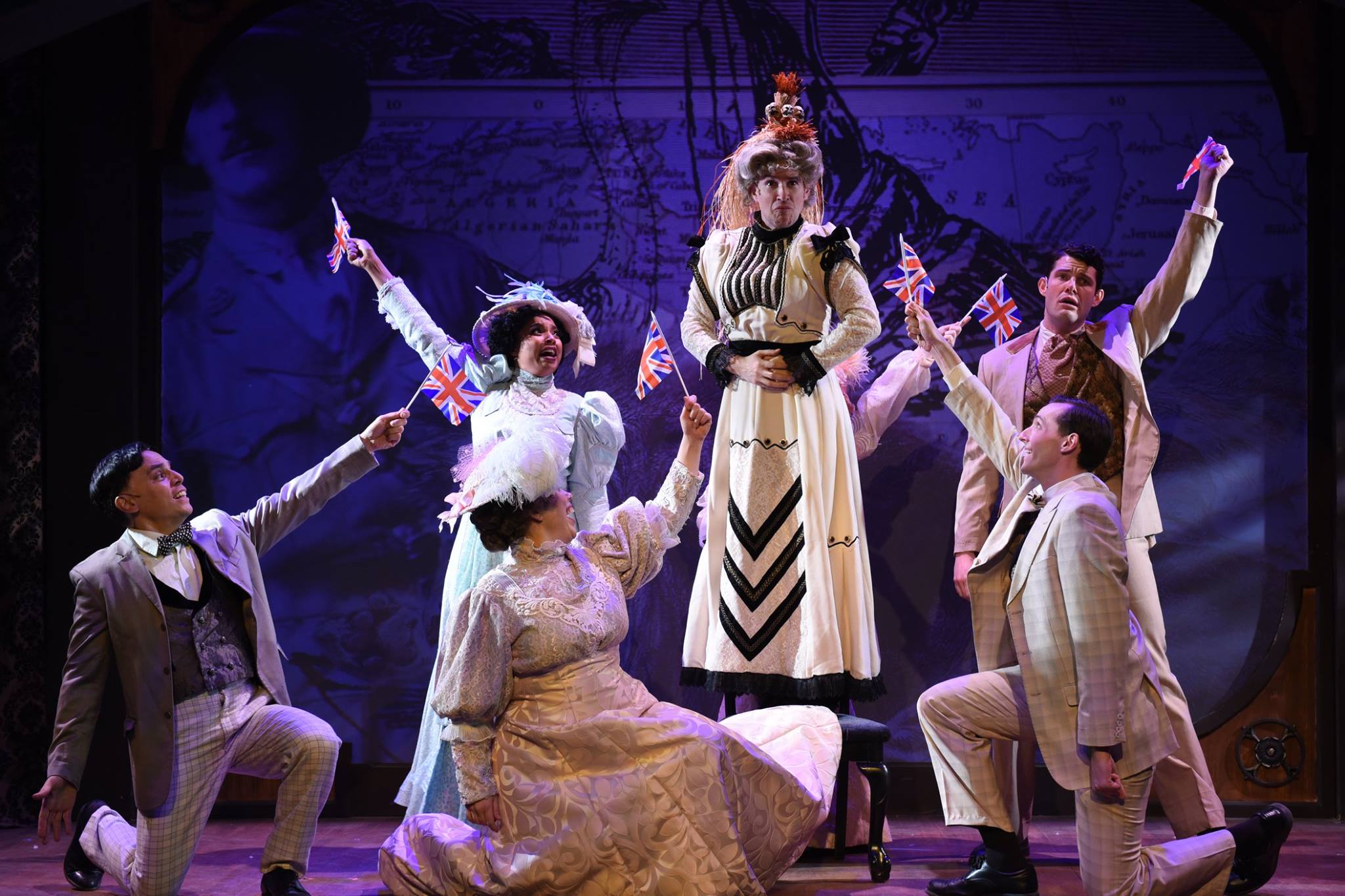 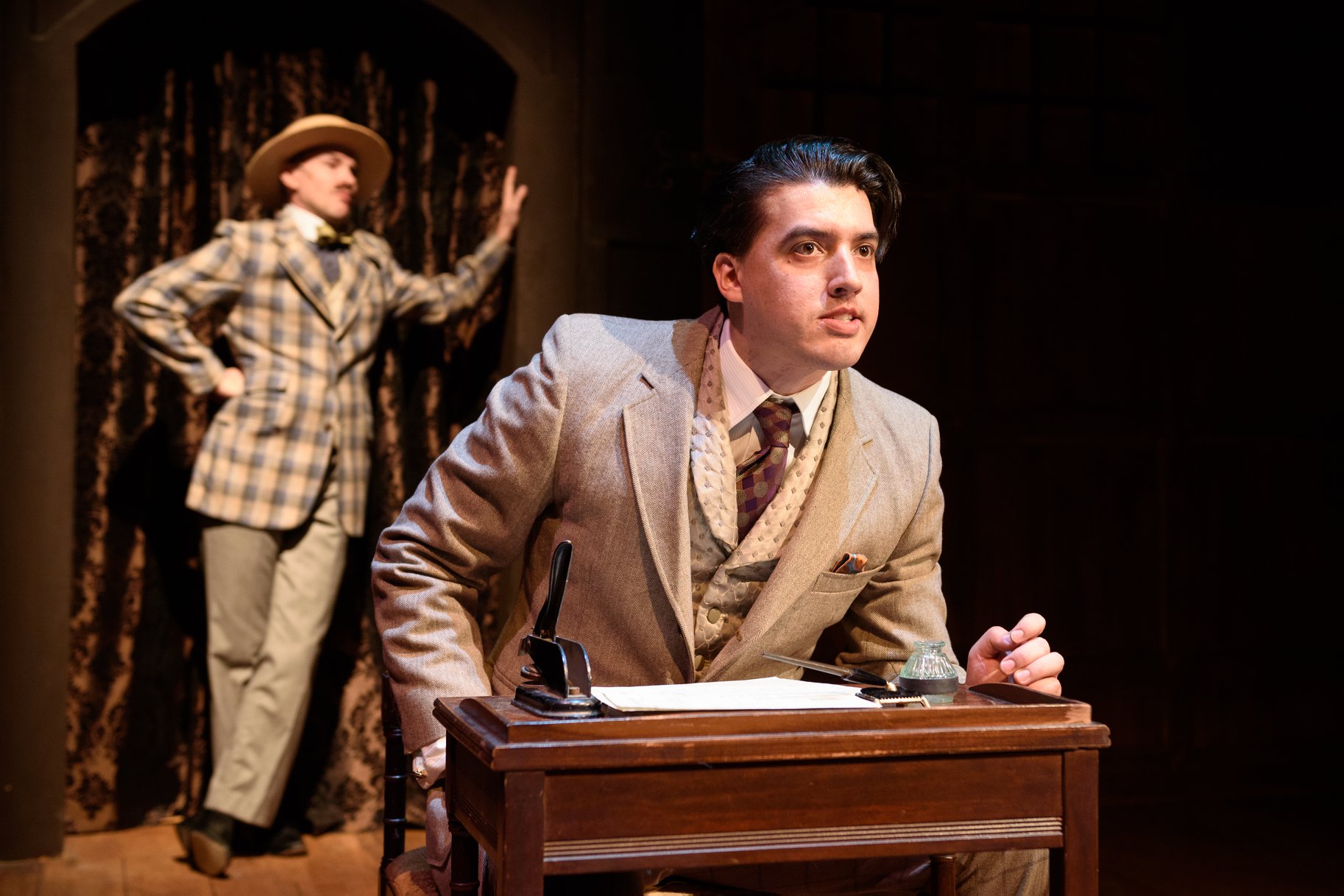 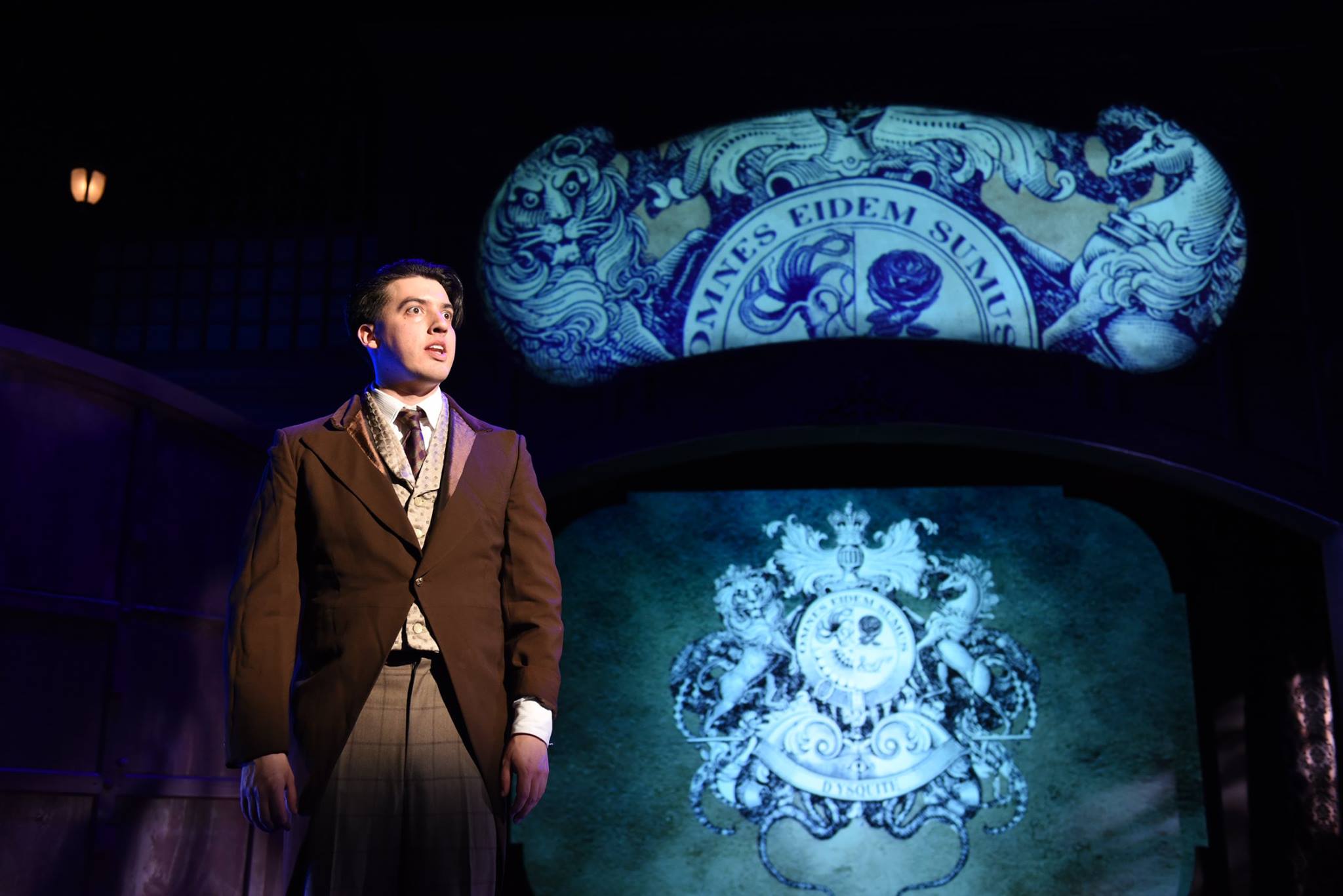