This event is now over. Stay tuned for more information on Chicago Sings 2018!

Chicago Sings is a one-night-only fundraising celebration honoring artists whose music has changed the world, presented by a who’s-who roster of Chicago music theatre and cabaret favorites. This year’s Chicago Sings pays homage to “Frank Sinatra & The Rat Pack” and also serves as the kick-off party to Porchlight’s 2017–2018 season.

Seating is limited and general admission. Doors will open at 6:30pm.

Food & Beverage will be available at the venue, but not included in the price of your ticket. 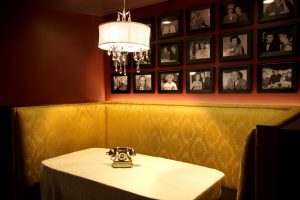 You and five friends could watch the show in style from your VIP seats in the world famous Booth One, Sinatra’s private booth from The Pump Room in the Ambassador East Hotel, now at Second City’s UP Comedy Club. And the first round’s on us!

The winner will be announced by Porchlight via Facebook LIVE Monday, Aug, 28 at 11 a.m. at Facebook.com/PorchlightMusicTheatre